According to Webster, suffering means “the bearing of pain, distress, etc.” Seldom do we hear in our society that suffering is a blessing, instead it is something to be avoided. The majority of our disabled and elderly are sent to convalescent home, out of the view of the general public. We are a society that strives for the fastest, easiest and least suffering possible.

So, it’s not unexpected that we hear society say the compassionate thing would be to let the person who is suffering go, or put the person out of their pain. Yet, the word “compassion” comes from the Latin compati which means to suffer with. Even those who propose the legalization of euthanasia, physician-assisted suicide, want to call the deadly act “Compassion in Dying.” If we are to be truly compassionate, then we must come to terms with suffering, not avoid it, but embrace it as we embrace those we love who are suffering.

The following article, written by my friend Cheryl Hutcherson-Birge and a long time board member of the Scholl Institute of Bioethics, tells us how one family found blessings through the suffering of her husband. Cheryl is a Registered Nurse, a speaker for Scholl Institute of Bioethics and California Nurses for Ethical Standards, a wife and a mother. She and her late husband, John Hutcherson were also featured in the documentary, The Right to Kill, narrated by William F. Buckley.

Praise God for his wonderful ways and the marvelous blessings he gives even through suffering. He has filled the gaping wound left in my heart in 1982 when my beloved husband, John, suffocated due to unrecognized swelling while in the recovery room following spinal neck surgery. Even though records show that he awakened five times saying, “I can’t breathe“, additional anesthesia was given five more times to calm him. After a fifty-minute fight for breath, his airway was completely occluded. His heart rate slowed to 4 beats per minute before intubation was established and attached to a ventilator.

Anoxic brain damage was extreme. Over the next few days, his doctor, showing me John’s flat EEG’s, pronounced that death was imminent. However, I remembered the Bible verse, “Call on me in the day of trouble and I will deliver you, and you shall glorify my name“. I believed that the Lord is in charge of life and death; therefore, I refused to give in to the doctor’s pronouncement. Where there is life, there is hope.

I had gone into shock when I first saw him, so blotched, cyanotic, dead looking, with eyelids open and pupils completely expanded. My heart wanted to fail, but for our baby daughter’s sake, I simply had to keep going. My vision reduced to looking through two dark tunnels for the next six months.

Over the next four months of his deep coma, I visited John every two to four hours around the clock, getting minimal sleep and dividing my time between him and our children. I encouraged him, played his favorite music, interpreted his surroundings, gave him only good news, brought our daughter to visit him daily, asked our pastor to baptize him and prayed nonstop. Our teenage sons also visited and some of his colleagues from the university read from the Bible to him.

That first week in intensive care, John let me in on a little secret. Though clinically unconscious, unresponsive to deep pain and completely paralyzed, for me alone he could wiggle one big toe. As an RN, I knew that many unconscious people hear everything going on around them. We established a signal, one wiggle for “yes” and two for “no”. On this basis, I was able to request what he wanted: pain meds, blankets, turning, etc. Much to my chagrin, he refused to perform this little signal if anyone else was in his room – or even peeking around the corner. My fellow nurses and doctors suggested to me that I was in denial and imagining things, which only devastated my spirit further.

After three weeks, John could close his eyes himself and breathe on his own. He had lost 30 pounds, but when his digestion returned, I argued with a group of his specialists for tube feedings to begin until they reluctantly agreed. One night an on-call doctor advised me to let him write a do not resuscitate order. I was shocked and told him to tell everyone that they had better never suggest that to me again. Here I was, fighting for my husband’s life, and every indication was that they wanted to end it.

Through the ordeal, God miraculously supplied all of our needs down to the last detail and penny. Best of all, God gave me the chance to get to know Him better and to depend on Him. I had to. That year I became born-again by asking Jesus into my heart. Each member of my immediate and extended family did so too, all influenced by what they saw God doing in our lives.

After four months, the hospital refused to keep John any longer. I arranged for help with his care at home, against the advice of doctors and social workers who said I should “put him somewhere and get on with my life.” My view was that my family was my life.

Homecoming day saw all of his hospital nurses and our new homecare nurses gather at his bedside before he left, when to their utter amazement – and my relief, he opened his eyes, turned to me and smiled ear to ear. Vindication is so therapeutic! Although John remained mostly paralyzed and without speech for the next decade, he had a normal wake/sleep
pattern. Communication improved early-on by his learning to blink three times for “yes“, twice for “no” and appropriate facial expressions. It was a comfort to have him home and under my watchful eye. He was the earthly anchor for our family. 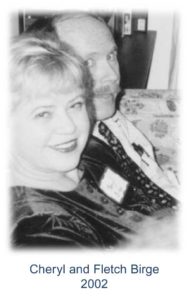 God gave John peace and restored his memory. He obviously understood everything that was said to him, as he was consistent in his eye blink answers. He responded ‘yes‘ to wanting to live and ‘no‘ to ever feeling that he wanted to die. Two times, but never again, he was able to raise each of his legs. We tried with some success for him to spell on an alphabet board, while waiting anxiously for technology to perfect a computer controlled by eye blinks. That was not yet to be.

In that first year, John blinked ‘yes‘ to having the Bible read to him, after which he consented to asking Jesus into his heart. For the rest of his life, his choice was to hear only the Bible read and Christian music. In 1993, despite emergency room efforts to save his life, John died of congestive heart failure and went to be with the Lord.

By God’s grace, John and all the rest of our family have been saved. We have grown in spirit, patience, perseverance, prayer, and unwavering love and devotion. God supplied everything needed to be able to do his will and to care for our loved one.

Update: Cheryl finished raising their daughter. She happily remarried in 2000 to a wonderful, God-fearing man.